(Note: in 2002 we had a very primitive digital camera! Someday I hope to find time to post better photos from our 2019 trip to Israel in our Photo Album)⇔

Jerusalem–the Eternal City (photo by Michael’s Mom, about a year after our trip)

“O Jerusalem, Jerusalem, the one who kills the prophets and stones those who are sent to her! How often I wanted to gather your children together, as a hen gathers her chicks under her wings, but you were not willing! See! Your house is left to you desolate; for I say to you, you shall see Me no more till you say, ‘Blessed is He who comes in the name of the Lord!’ ” Jesus said this in around AD 30. Matt 23:37-39 (New King James Version of the Bible–NKJV)

Off to a rough start 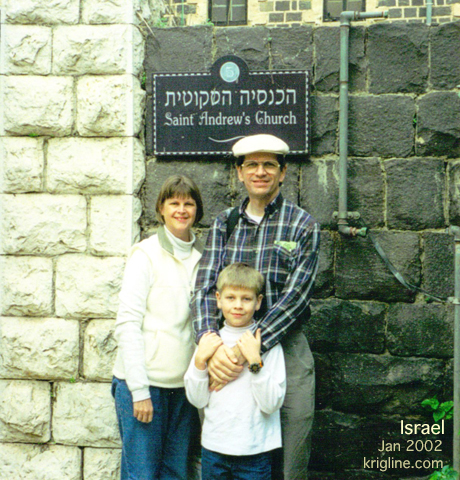 We couldn’t resist posing in front of this church that bears our son’s name! (Unfortunately, I can’t remember which city it was in.)

After Christmas in Turkey with Michael’s sister, we had the wonderful opportunity to visit Israel to see friends in late 2001 and into January 2002. Having read about these places all our lives (in the Bible), this was really a dream vacation.

Our trip from Turkey to Israel got off to a bad start. Vivian needed a cola before we left the Antalya airport, and we were shocked to find that a small Coke at the airport Burger King cost us 3 million Lira ($2US–far above the prices we are used to in China!). We were the only “International” passengers leaving from Antalya, and they almost forgot about us!

In Tel Aviv, waiting in the line for passport control (VERY late at night, way past Andrew’s bedtime), the lady in front of me was not paying attention when her turn came. When I tapped her backpack to get her attention, she turned around and snapped: “Did you PUSH me? DON’T PUSH ME!” What a welcome!

Next, I went to change money and the cashier would not accept the first $100US I gave her (fortunately, I had a second one that was OK). Then there was no meter in the taxi so we didn’t know if he was ripping us off or not. I paid 100 shekels ($25) and the hotel clerk later said that 80 would have been about right. We needed water, and the hotel clerk directed me to a plaza outside and about 100 meters away – it was unsettling to walk that far after midnight in an unfamiliar place like this. You see, we were among the very few tourists we saw during that trip because of “current” fighting in various parts of the country. Throughout history, some of the land of Israel has been among the world’s most contested pieces of property, and violence comes with the territory.

Things look better in the morning

The next morning, things got a little better. Elevator inspectors reportedly come to this little hotel twice a year to check the cables on the tiny elevator, and they came while we were at breakfast. Fortunately, Vivian convinced them to wait until we got our heavy suitcases down from the fourth floor before they disconnected the cable! We checked out and assured the clerk that we had left the key in the room, but as we drove down the alley Vivian discovered the key in her purse! I ran and dropped it at the hotel desk. The clerk was not around, likely having prodded up four flights of steps to carefully search the room for this key!

The next stop was Nazareth – Jesus’ childhood home, and now home to one of my friends from college and her family. We made it to Nazareth in record time according to our friends – and this is amazing because the taxi’s speedometer never went above zero m.p.h.! The Marriott was waiting for us, thrilled to get some business. All but two floors in the hotel were locked and shut – there just weren’t any tourists. Ben & Donna had talked them into a free upgrade into a $250US per night, 2-room suite, but we had to pay only $110 per night. The view was great in two directions from high above the large, famous city.

Ben then took off the next two days to show us around the Galilee region. We saw most of the famous places: Capernaum, Sea of Galilee, Sermon on the Mount, place of Jesus’ speech from a small boat, and of course Nazareth. We enjoyed eating “St Peter’s fish” overlooking the sea for lunch, and even though we arrived quite late we got a special “last minute” tour of Nazareth Village (restored to look like the 1st Century) – and there Andrew even got to feed a baby lamb!

The Sea of Galilee during my parents’ visit in 2003.

Ben and Donna were wonderful hosts, driving us around and explaining things. Here’s the Sea of Galilee in 2002.

Michael, our son Andrew, and friends on the shore of the Sea of Galilee. (2002)

We arrived at Nazareth Village at feeding time, and Andrew was given the job of feeding this baby lamb!

Narareth Village is a reconstructed first-century village. In addition to being great for tourists, it is used for movie-sets and for “live Christmas card scenes” like these.

“By the way of the sea, beyond the Jordan, Galilee of the Gentiles: The people who sat in darkness have seen a great light, and upon those who sat in the region and shadow of death Light has dawned.” Jesus, quoting Isaiah; Matt 4:15-16 (NKJV)

Two of the most famous bodies of water in the Bible are the Sea of Galilee and the Dead Sea (shown below). Technically, the Sea of Galilee isn’t a “sea” at all, because it has fresh water. Nelson’s Bible Dictionary says it is only 21 by 13 kilometers (13×8 miles), and up to 50 meters deep. It’s water flows down the Jordan River into the Dead Sea, which is the lowest place on earth. It was too cold to swim in either, but we could at least get close enough to feel the water. People were shooting at each other across the Jordan River, so we were not allowed to visit the river, or famous places like Jericho or Bethlehem.

We spent New Year’s Eve with Ben & Donna’s pastor – an Arab Christian from a Christian family. We had a delicious meal and a wonderful evening, capped off by a balcony view of many fireworks (with scattered machine gun fire), which was followed by the pastor playing Christian songs on a middle-eastern stringed musical instrument.

To Jerusalem, and the South

On January First we headed south for three more wonderful days with another friend from college. On the first, we saw the Second Temple model and visited the Dead Sea Scrolls exhibit at the Israel Museum. We walked around the Mount of Olives and the old City on the second day, ending up at the Garden Tomb. Our last full day was spent seeing Masada, En Gedi, Qumran, the Dead Sea and the Tabernacle in the Wilderness. Friday we headed back to Tel Aviv to catch the plane for China, via Istanbul.

The Kriglines, standing by a model of how Jerusalem looked 20 centuries ago. This model has been used in movies about the life of Jesus.

Our view of the City of Jerusalem, from the Mount of Olives.

Vivian, Michael and Andrew outside the Garden Tomb.

The Dead Sea (or Salt Sea); the lowest place on earth, and likely created by the destruction of Sodom and Gomorrah (Gen 19:24)

Not far from the Dead Sea, someone built a full-size model of the Tabernacle in the Wilderness–a portable Temple used by the Jews after their release from slavery in Egypt (see Exodus 25 & 26).

It was interesting to see the size of the “Tabernacle in the Wilderness.” Behind us is a replica of the Brass Altar used for sacrifice. (Andrew is also holding a solar-powered hat.)

The Garden Tomb, then back to Shanghai

It is hard to say which places were the most interesting because we enjoyed them all! Our second college friend was working as a nurse in Jerusalem, and she too was a wonderful hostess. Denise introduced us to many historical sites, but I think our favorite was “the Garden Tomb” just outside the city. The tomb and gardens match the description of the place where Jesus was buried. For many reasons, it was a quiet, moving place, full of reminders of how remarkable it was that Jesus rose from the dead on the third day, to prove that our sins were forgiven! We were so inspired there, that we got the taxi to take us back for a second visit before leaving “the Holy City.”

If you don’t understand the connection between Jesus’ death and our forgiveness, read my article on the subject (on my old website: click here), or just ask us sometime. We’d be happy to explain! You can see another photo of the Garden Tomb, and read a remarkable Chinese poem, by clicking here (and scrolling to the bottom).

On our “Turkey” page you can read about the end of the trip, which included a snow-storm in Istanbul!

Altogether this two-nation odyssey took 18 days, and we have two photo albums to prove it! In many ways it was like a dream come true: we had been wanting to see what Michael’s sister had been up to, and had wanted to visit Israel for a long time. The blessing of a “family Christmas,” coupled with the chance to walk on “Biblical” ground will surely make this vacation difficult to “top” for years to come.