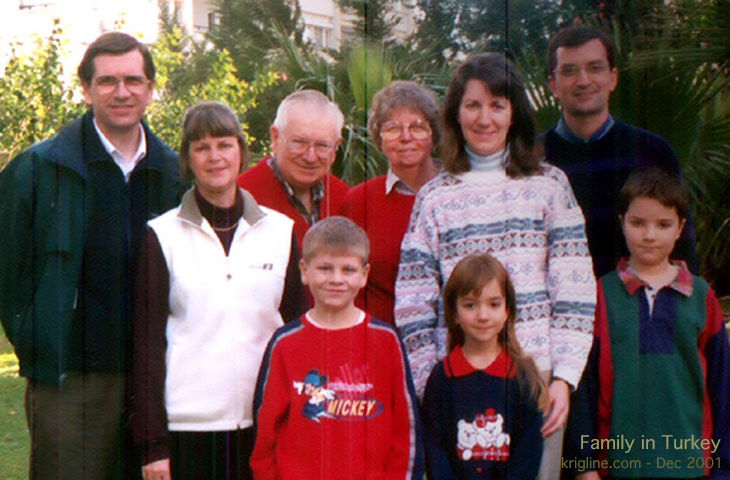 The main purpose of this 2001 visit was to see Michael’s sister and family, who had been working in Turkey for many years. Michael’s parents also flew to join us (and footed the bill!). It was a rare Christmas together, for a family scattered over three continents.

Turkey: Intersection of cultures and religions

I’m no expert on the history and geography of Turkey, but a map will tell you that it’s the only country in both Europe and Asia. Artemis, the ancient Greek goddess, had a magnificent temple here (see what’s left below); much of the Bible’s New Testament was written to people living in what we now call Turkey; the Aya Sophia (shown below) testifies that Turkey was one of the first great capitals of the Christian faith; and today it is predominantly Muslim. My own visit was too short, as I’d love to learn more about this remarkable intersection of cultures and religions. But for one memorable week in December 2001, plus a frosty two days in 2002, I was enjoying Turkey with my family. [Note: in 2001-02, digital photography was in its infancy, and my camera could only produce pixelated pics with 640×480 pixels! We also took lots of “real photos,” but they remain hidden in photo albums somewhere.]

Turkey is a long way from our home in Shanghai, China! Our flight first stopped in Beijing, where we (with all our hand luggage) had to go through Passport Control. (In America, no one cares who leaves; you only have to have a passport to get IN!) It was around midnight, so a very tired Andrew had difficulty staying vertical in the long line! We had a long layover in Istanbul and finally arrived in Antalya, Turkey, some 23 hours after we left our apartment in Shanghai.

St. Paul landed here at Antalya’s quaint harbor (called Attalia in Acts 14:25). We hope his companions were as gracious as Michael’s sister and her family, who showed us a wonderful time!

With family in the “old city” part of Antalya.

One of my more vivid memories was watching Andrew and his cousin play here, in winds so strong that they could barely stand! It was easy to imagine a 1st century ship being tossed around in such winds and waves!

Antalya’s beautiful Mediterranean beaches and snow-capped mountains attract a lot of European tourists annually, and it is easy to see why! The food is also wonderful—so what are YOU waiting for?

Antalya is beautifully situated on the Mediterranean coast and surrounded on three sides by snow-capped mountains. On our first day (we arrived at 9 a.m. local time) we enjoyed the quaint harbor mentioned in Acts 14:25 (Antalya=Attalia).

The next day we started on a four-day adventure across some of Turkey’s many mountains to see more of its many historic sites. The weather reporters predicted clear roads, but they were wrong! After getting out to push our rental van off a patch of ice, we eventually found a snowplow to follow up the snow-covered road. In the “next village” we had to buy snow chains, but even this inconvenience turned out “for the good” as Michael’s sister got the thank these mountain folks with a free video about the historical Jesus, and a New Testament – which they gladly received from their new foreign customers.

This beautiful Roman road in the ruins of Hieropolis gives testimony to Turkey’s great past. The region claims a 7000-year history under a vastly different host of rulers.

Contrary to weather predictions, it started to snow! In the middle of nowhere we bought snow chains and watched workmen weld on extra links to make them fit.

Yes, it was cold, but that is NOT snow! You’re looking at the calcium deposits of Parmukele’s famous hot springs.

After an overnight rest in Denizli we visited the ruins of Hieropolis, the hot springs of Parmukele, and the ruins of Laodicea (sorry, there wasn’t much to take a photo of!). Standing on the desolate hilltop that had once been proud, thriving Laodicea, off in the distance you could see the “hot” springs in one direction and the “cold” snows in the other that had once supplied water through pipes to the city. Unfortunately, the distances to both were great, and thus the water arrived “lukewarm” – which gave us new insight into Jesus’ condemnation of Laodicea’s tepid spirituality (Rev. 3:14).

In the morning we pushed on to Ephesus – surely one of Turkey’s most prized and praised historical places. As I recall, the harbor silted up in the 4th Century (the Mediterranean is now some 14 kilometers from the site), then an earthquake and malaria epidemic led residents to abandon the city in the 5th Century. But the early Christians who first got to read Paul’s letter to the Ephesians must have lived in a magnificent city!

The main street of Ephesus, one of the most important cities in the Roman empire at the time of Jesus.

The rebuilt edifice of Ephesus’ famous library, reputed to be among the best of the world at the time.

Standing in the well-preserved ruins of the massive coliseum, you could imagine Paul in the center, first fighting “wild beasts” (1 Cor 15:32) and then preaching Christ-crucified: foolishness to the Greeks and a stumbling block to Jews (and to Muslims who now rule Turkey), but “Christ the power of God and the wisdom of God” to those being saved (1 Cor 1:23ff).

Here’s our family, with the Ephesus amphitheater in the background.

Acts 19:28 takes place near here, site of one of the most important temples of Europe’s many gods (Artemis was worshipped here). All that remains now is a lone pillar (though other pieces are likely in museums around the world).

One of my favorite Bible verses was written to people living in Ephesus. It says that Earth’s great mystery is “that now the manifold wisdom of God” is being made known by the church to supernatural powers, “according to the eternal purpose which He accomplished in Christ Jesus our Lord, in whom we have boldness and access with confidence through faith in Him.” (Eph 3:10-12 NKJV) What a remarkable idea: that God actually had “an eternal purpose” in mind for this little planet, and that “He accomplished it in Christ”!

Closer to Antalya we also enjoyed visiting the ruins of Perga (Acts 14:25) and Aspendos. A special treat was to visit the Christmas service in Antalya’s “cultural center.” What a joy to see New Believers worshiping and reaching out in a land that has SO few Christians. In fact, I couldn’t help but notice the obvious absence of Christianity, once centered here. The fact that Christianity has “died out” in several places, only to “rise even stronger” somewhere else, makes it unique among world religions. (Who, after all, worships the Greek gods anymore, and why haven’t eastern religions “risen” in other parts of the world?) But the demise of Christianity in Turkey also reminds us that Christianity is not a race or culture that is effortlessly passed down from generation to generation. Christianity springs from forgiveness via a faith-based relationship with, and submission to, Jesus Christ.

Of course, we were also blessed to have the company of Michael’s parents, sister & brother-in-law, and Andrew’s two cousins in all of our adventures. In Turkey (and the following week in Israel), there were almost no tourists so there were plenty of bargains to be had, no lines to wait in, and many genuine expressions of thanks from those who make their living from tourism. In spite of the snowstorms, hail, gale-force winds and drenching rain we endured in our 9-day visit, we had a great time and will long cherish the holiday memories.

Here’s one more photo of the kids, in Antalya.

Andrew freezes in front of the Aya Sophia, a Byzantine church that was earth’s largest enclosed space for 1000 years!

During our one-day snow-bound layover in Istanbul, this was our view from a ferry on the Bosporus River.

I wish my little camera could have held more photos. Maybe someday I’ll digitize things from the photo album, or (better yet) I’ll get to return to Turkey. And speaking of “returning,” we flew to Israel next, and had planned to change planes in Istanbul on our return to China, but we got stuck in a terrible snow storm!

We left Tel Aviv three hours late (and everything at the airport closed at sundown since it was the Sabbath), and landed in Istanbul in a blizzard. The passengers cheered for the pilot when the wheels all hit. The airport was closed shortly thereafter. It was a miracle that we got in!

The next day (we had been told that our layover would be at least 26 hours!) was freezing and many flights were canceled or delayed. Turkish Air lodged us (and dozens of others) in a hotel near the city center, but communication was very lacking. It was too cold and snowy for much sightseeing – especially without sufficient winter clothes! We did, however, manage to get a tram to the river, take a ferry across the Bosphorus and back, and finally visit the Aya Sophia (a Byzantine church that had the largest enclosed space on Earth from AD 500 to 1500 – quite amazing!).

We finally decided to head to the airport about two hours before our scheduled departure – over the objections of the hotel staff who were waiting to hear from Turkish Air about our flight. We had managed to connect to the airline by phone (not easy!) and they thought we might leave “on time” – but no one told the hotel. We actually flew out about two hours late, leaving sometime around midnight. There were many empty seats on the plane, so we all managed to stretch out for a decent rest before arriving in Beijing (and eventually getting home to Shanghai).

Altogether this odyssey in Turkey and Israel took 18 days! In many ways it was like a dream come true: we had been wanting to see what Michael’s sister had been up to, and had wanted to visit Turkey and Israel for a long time. The blessing of a “family Christmas,” coupled with the chance to walk on “Biblical” ground will surely make this vacation difficult to “top” for years to come.

All content ©2019 Michael Krigline unless otherwise noted. This is the personal website of Michael & Vivian Krigline: building social bridges in SE Asia since 1999. We also run Krigline.com, www.krigline.com.cn, and EFLsuccess.com. {If you are looking for our son, Andrew Krigline, Click Here.} Most of our resources are available for use in a class, church, etc., if used according to our Website Standards and Use Policy, which also talks about cookies; by visiting, you agree to these policies. Thanks for stopping by!

Want to save money on your US mobile phone bill? Ting lets me pay for only what I use! {Click Here}

I researched numerous web hosts before I decided to go with WebHostingHub.com. They help establish and manage my domain names, and have advanced server equipment, multiple email addresses, great customer service, and more. Click the ad/link below to get more information!

wp.krigline.com chose WebHostingHub.com as our server — Click to see why!