↓
Home→Writings→↑Articles→↑The Passion of the Christ 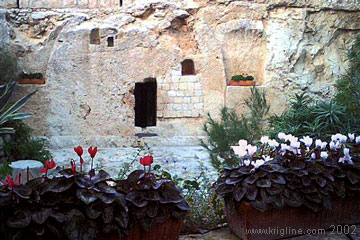 Picture credits: see note at the bottom of this post.

Some of my thoughts & a remarkable Chinese poem ⇔

(Note: This was written during my visit to the US in 2004. The hot movie during that visit was Mel Gibson’s The Passion of the Christ, rated R for showing excessive violence and torture. It became one of the biggest US box-office hits in movie history, and broke many records worldwide.)

The Passion of Christ

Note: The word “passion” came to English (12th century) via French from the Latin stem passion, meaning “suffering, affection,” which came from pati “to suffer.” When capitalized, “the Passion” refers to the sufferings of Jesus Christ from his last supper through his death on a cross. (from Microsoft® Encarta® Reference Library 2004)

Mel Gibson’s movie, The Passion of the Christ, has stirred up a lot of controversy here in the States. Some say that it is the most controversial movie of the new century, even though it has also been one of the biggest box office successes in movie history. So far (Mar 2004), it has earned over $300 million, and we are still a few weeks from the Easter season it so graphically presents on the screen. This is especially amazing since no Hollywood studios were willing to undertake the project, leaving Mel Gibson to provide funding and produce it himself.

A lot of the debate comes from those who wonder if it is wise to so accurately portray the events written of in the Bible–an accuracy that even extended to recording the scenes in the language of the first century AD. Some believe the movie is anti-Jewish, since it shows how the Jewish leaders put Jesus to trial and then called so strongly for his execution. Others voice concerns over the graphic depiction of the crucifixion, saying that there is something wrong with anyone who would choose to watch humans giving an indescribable beating and whipping to a man before driving nails through his hands and feet.

Perhaps it is the “indescribable” nature of Jesus’ punishment that made Gibson feel that a visual presentation was necessary. I have given a fair amount of time to studying the Bible and the historical context in which the book was written. The Roman punishment of crucifixion was one of the worst examples of man’s inhumanity to man. Those who wrote the scriptures had all seen crucifixions in person, and thus felt no need to describe it’s horrors in detail. But historians and scholars say that Jesus likely went through everything shown in Gibson’s movie, and believe it or not, it may have been even worse! Words fail in describing such cruelty, but Hollywood magic makes the brutality believably real.

This is important because (if the Bible and Christians are correct), what we believe about Jesus’ death on the cross is the main determiner of whether or not we enter the Kingdom of God. As Jesus says in the movie, “No one takes my life away from me, but I lay it down. I have the power to give it up, and the power to receive it back again” (John 10:18, Bible). The movie also told us that the biggest part of his pain was caused by the weight of the world’s sin—Jesus voluntarily took this crushing burden on himself, so that when he died (in fulfillment of prophecy), mankind’s sin would be “paid for.” This is the meaning of the Aramaic expression Jesus uttered just before he died: “paid in full.” Another scripture came to my mind as I watched a crude leather whip cut stripes into Jesus’ flesh: “He was wounded and crushed because of our sins; by his stripes we are healed. All of us were like sheep that had wandered off. We had each gone our own way, but the Lord gave him the punishment we deserved.” (Isaiah 53:5-6, written prophetically 700 years before the time of Christ.) 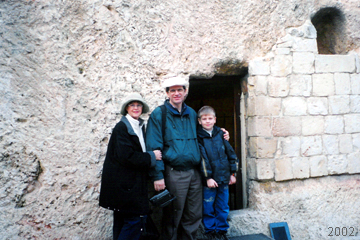 Michael and family outside “The Garden Tomb,” a wonderful place for meditation just outside Jerusalem’s walls. Could this have been the REAL empty tomb?

If I have a complaint about the movie, it is about how it ended. We see Jesus die, but movie goers are not told that he remained sealed in the tomb until the third day afterward (this is the day we call Easter or Resurrection Day). While I am glad it showed Jesus alive again, I think a closing scene showing his reunion with his followers would have provided a taste of the joy that Christians experience when we consider the events of Easter. The resurrection was not just about coming back to life, but about proving that the sacrifice had worked—for the first time since Adam sinned, the way was clear for humans to walk with God and with each other as holy (i.e., forgiven) people, free from shame. Just as the earthquake shown in the movie removed the barrier between God’s “most holy place” and “the people,” the resurrection removed the barrier of sin and shame between God and humankind, for Jesus’ love had covered over the multitude of our sins. After watching in breathless horror for two hours, it would have been nice to leave the theater with “He is risen!” ringing in my ears.

For all its strengths and weaknesses, The Passion of the Christ does give us an accurate picture of what it cost God to pay for our forgiveness. To “water down” Jesus’ suffering is to rob ourselves of an eternal truth: if THIS was the only solution to the problem of sin, then my sin must be far more horrendous than I ever imagined. The cross and resurrection are the center of Christianity, the family-like communion of Jesus’ followers, and the Christian understanding of life. According to the Bible, “Unless Christ was raised to life, your faith is useless, and you are still living in your sins. Furthermore, those people who died after putting their faith in him are completely lost. If our hope in Christ is good only for this life, we are worse off than anyone else.” (St. Paul, 1 Cor 15:17-19)

Two thousand years ago, the birth of Jesus split human history between BC and AD, and ever since then his Passion has split humans into two opposing groups: one which embraces the resurrection as the well-spring of faith, hope and eternal life, and one which fiercely rejects Jesus as a mad man who has deceived millions. From the moment of Judas’ betrayal until today, the Passion of Christ has captured the imagination and admiration of artists and poets, even as it has prompted the wrath of political and religious leaders all over the earth. Is it any wonder, then, that Gibson’s movie has stirred such controversy?

Let me close by sharing the translation of a remarkable poem, written some 300 years ago by a Qing Dynasty Emperor. In reading these words, one can’t help but wonder if this gifted leader had figured out the answer to the question Governor Pilate asked Jesus centuries before: “What is the Truth?”

–my translation (with the help of Kei Li):

A mission was fulfilled when the blood from the Cross became a stream,
And grace a hundred-fold flowed from the West.
Captured and escorted by guards, he walked the midnight road;
A disciple turned away three times before roosters crowed.
Countless lashes broke his skin;
Six feet above he hung, with two thieves.
Tragic and savage, it moved the whole world and startled officials of every rank;
Seven last words, it is finished; a multitude of souls weep aloud.

Notes: Chinese Emperor Kangxi (1654-1722) was the second emperor of the Qing Dynasty. He ascended to the throne at age 6 and took full power at age 13; his reign of 61 years makes him China’s longest-reigning emperor since 221 B.C. I’ve also heard that he is regarded as one of China’s best emperors. Chinese poetry is very difficult to translate, and this type in particular must abide by strict rules that limit the number of characters, thus it uses abbreviated terms and densely packed ideas. Notice how much longer the English is than the Chinese! Page 255 of Faith of Our Fathers by Chan Kei Thong does a great job of showing how ingenious this poem really is in its original language. 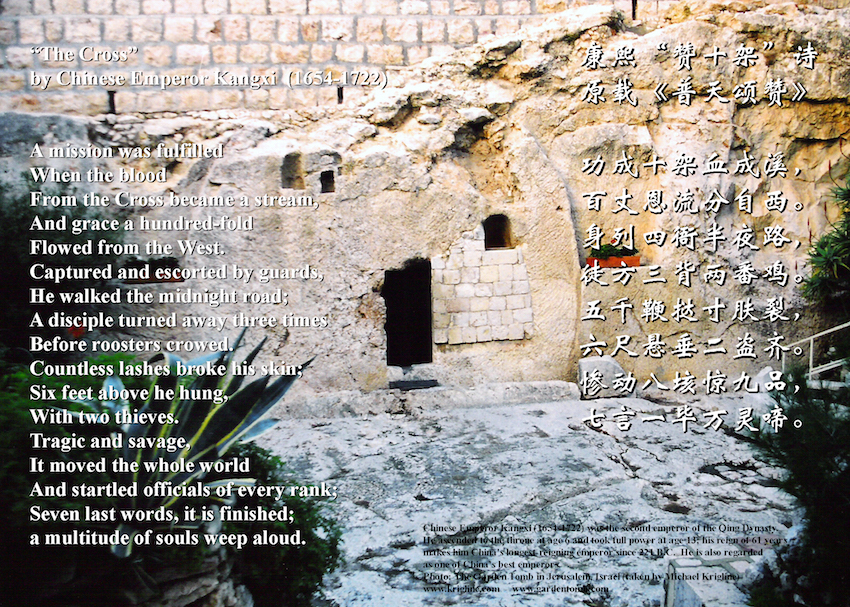 The above is a new feature on this website; please email me if it does not work!

(All three photos on this page were taken on a 2002 visit to Israel. Our time in this quiet garden near the city wall was one of the highlights of our trip. You can read more about this place at www.gardentomb.com. Read some thoughts for children on Easter by clicking here: A Bird’s Eye View of Easter. A holiday summary for students/teachers is also available.)

This film is neither preachy nor pedantic, and was a welcome surprise for me. As a non-Christian who nevertheless respects the historical figure of Jesus Christ and the beauty of his philosophy and teachings, I found The Passion to be a powerful portrayal of much that I think is worthwhile about the Christ story.

Original content ©Michael Krigline, including photos if noted. For contact info, visit About Us. For privacy info or to make a contribution, see our Website Standards and Use Policy page (under “About Us”). [Titles that start with ↑ point to devotional articles that help us “look up”.]