I don’t usually just copy things written by others, but with COVID killing my friends and neighbors, I thought it worthwhile to post this timely, short article from someone I respect (for now, you can also read it at CBNnews.com). ~MK 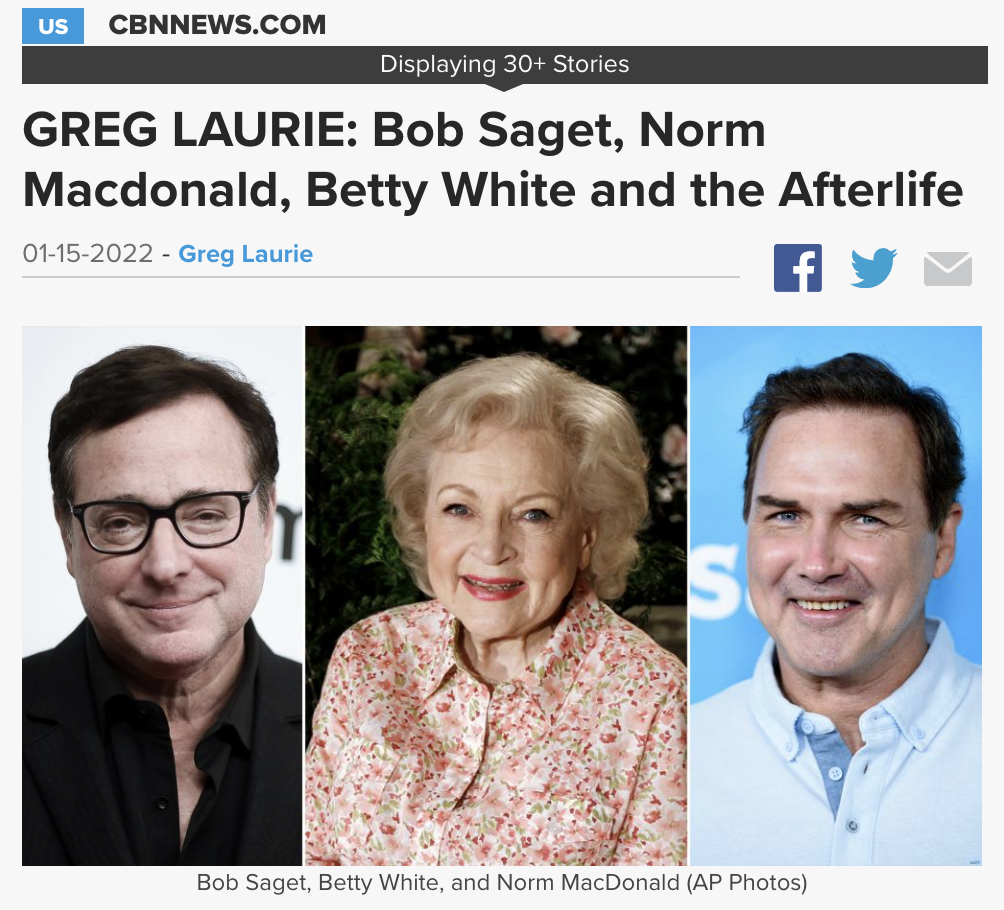 We were all shocked and saddened to hear of the passing of Bob Saget at age 65 (Jan 9, 2022). To the generation who grew up watching “Full House,” Bob was a father figure they came to love. Yet another generation discovered him as the host of “America’s Funniest Home Videos.”

Bob Saget was found dead in his hotel room in Florida following a show on his comedy tour. This tragic event happened right on the heels of the death of beloved comedic actress Betty White, who died at 99 (Dec 31, 2021).

Bob Saget made this statement on Instagram after Betty passed: “She always said the love of her life was her husband, Allen Ludden, who she lost in 1981. Well, if things work out by Betty’s design—in the afterlife, they are reunited. I don’t know what happens when we die, but if Betty says you get to be with the love of your life, then I happily defer to Betty on this.”

He honestly added, “I don’t know what happens when we die.”

Death is something we all think about almost every day—some more than others. We should think deeply about death, but more importantly, about the afterlife.

In older times, people commonly wrote a Latin phrase on the top of documents: “Memento Mori.” It means “Think of death.” The phrase sounds morbid on the surface, but it’s not. It served as a reminder to be aware that life ends, eternity is close, and there is an afterlife.

Larry King asked Macdonald about his “religious views” in an interview.

“I’m a Christian,” Macdonald replied. “It’s not stylish to say that now.”

Larry King then asked, “Are you devout? … You believe in the Lord?”

Larry did not know he was interviewing a man facing death every day in his fight with cancer. He then asked Macdonald, “You think that you’re going somewhere when (life) ends?”

Norm said he did.

Larry said he could not believe in an afterlife because of all the evil in the world.*

Norm responded, “It sounds like you have a God-shaped hole in your heart.”

Larry did. We all do.

Norm Macdonald once posted these words: “Scripture. Faith. Grace. Christ, Glory of God. Smart man says nothing is a miracle. I say everything is.”

That sums it up perfectly.

I am not an expert on the afterlife, but I am a student, not only because I am a Christian and a pastor, but also because my son, Christopher, died in 2008. I have thought deeply about what happens when we leave this life and enter the next one. Here is what has brought endless comfort to me: There is a Heaven, and Jesus has made a way for us all to go there.

Jesus said, “I am the resurrection and the life. Anyone who believes in me will live, even after dying” (John 11:25).

My son believed in Jesus as I do. He is now in Heaven.

For the Christian, the moment we take our last breath on earth, we take our next breath in Heaven. Because Jesus died on the cross for my sins and rose again, I have hope for the afterlife. And I know that I will see my son again.

It is not a bad thing to think about these things deeply. Renowned author and theologian C. S. Lewis** said, “A continual looking forward to the eternal world is not . . . a form of escapism or wishful thinking, but one of the things a Christian is meant to do.”

Think about death, eternity and the afterlife. But think on it with the knowledge that death is not the end. There is an afterlife, but you need to be ready for it. Heaven is a prepared place for prepared people.

Only those who are prepared to die are genuinely ready to live.

Greg Laurie is the pastor and founder of the Harvest churches in California and Hawaii and of Harvest Crusades. He is an evangelist, best-selling author, and movie producer.

*I have never found an atheist or anyone else who could explain where all of the love and generosity in our world come from, so I can’t NOT believe in God and the afterlife he promises to all who are “born from above” (John 3:3). We all know that generous behavior (and there’s a lot of it, in spite of how the news focuses on evil) is not “normal” and is rarely seen in nature–it is a human trait. The Bible says people love because God first loved us (1 John 4:19). That makes sense to me. Around the world, there’s something written on our hearts, by which we know that love is better than hate, and good is better than bad. That universal coding, like all information, had to come from an intelligent source. And as Pastor Laurie said, Jesus has made a way for us to go to heaven. See John 1:12: lots of people reject Jesus, but to those who believe in his name Jesus has given the right to become children of God…and thus heirs of heaven. Jesus extends his invitation; he has made his choice; the only choice that remains is yours. As Pastor Greg put it: “Choose well.” ~MK (Below is another favorite quote from CS Lewis)

**“The Christian says, ‘Creatures are not born with desires unless satisfaction for those desires exists. A baby feels hunger: well, there is such a thing as food. A duckling wants to swim: well, there is such a thing as water. Men feel sexual desire: well, there is such a thing as sex. If I find in myself a desire which no expe-rience in this world can satisfy, the most probable explanation is that I was made for another world. If none of my earthly pleasures satisfy it, that does not prove that the universe is a fraud. Probably earthly pleas-ures were never meant to satisfy it, but only to arouse it, to suggest the real thing. If that is so, I must take care, on the one hand, never to despise, or to be unthankful for, these earthly blessings, and on the other, never to mistake them for the something else of which they are only a kind of copy, or echo, or mirage. I must keep alive in myself the desire for my true country, which I shall not find till after death; I must nev-er let it get snowed under or turned aside; I must make it the main object of life to press on to that country and to help others to do the same.”
~ CS Lewis, Mere Christianity

The Rich Man and Lazarus (a story from Jesus, Luke 26:19-31~ ESV)
“There was a rich man who was clothed in purple and fine linen and who feasted sumptuously every day.  And at his gate was laid a poor man named Lazarus, covered with sores, who desired to be fed with what fell from the rich man’s table. Moreover, even the dogs came and licked his sores. The poor man died and was carried by the angels to Abraham’s side. The rich man also died and was buried, and in Hades, being in torment, he lifted up his eyes and saw Abraham far off and Lazarus at his side. And he called out, ‘Father Abraham, have mercy on me, and send Lazarus to dip the end of his finger in water and cool my tongue, for I am in anguish in this flame.’ But Abraham said, ‘Child, remember that you in your lifetime received your good things, and Lazarus in like manner bad things; but now he is comforted here, and you are in anguish. And besides all this, between us and you a great chasm has been fixed, in order that those who would pass from here to you may not be able, and none may cross from there to us.’ And he said, ‘Then I beg you, father, to send him to my father’s house—for I have five brothers—so that he may warn them, lest they also come into this place of torment.’ But Abraham said, ‘They have Moses and the Prophets; let them hear them.’ And he said, ‘No, father Abraham, but if someone goes to them from the dead, they will repent.’ He said to him, ‘If they do not hear Moses and the Prophets, neither will they be convinced if someone should rise from the dead.’”

If you want to think deeper about this topic, and the validity of what Jesus said in general, one time-tested source is a book called Evidence that Demands a Verdict. You can read a sample here: uploads/evidence_sampler. A film that deals well with objections to the idea that Jesus rose from the dead is called Risen (2016, starring Joseph Fiennes; www.imdb.com).

For the Kriglines’ contact info, visit About Us. For privacy info or to make a contribution, see our Website Standards and Use Policy page (under “About Us”). [Titles that start with ↑ point to devotional articles that help us “look up”.]