Xi’an has been China’s capital several times, starting in about 200 BC. During the Tang dynasty (particularly from AD 618 to the late 700s), this city (then called Chang’an) was probably the largest and most prosperous city in the world. As the starting place for the Silk Road, the city has long been a center for the exchange of both goods and ideas between East and West.

From the 6000-year-old ruins unearthed nearby, to dozens of tombs left by the many dynasties that had capitals here, Xi’an has provided important clues into China’s past. When we lived in Xi’an (2002-05), the population was about 6.5 million; with all those people and the continual construction found in all of China’s cities, Xi’an had plenty of dust and pollution–which were hard on our health–but the city also has a lot going for it, both in terms of history and as the “door” to China’s vast central and western regions.

I (Michael) first visited Xi’an in 1985, while studying at Xiamen University. When I moved my family moved to China in 2000, our first “sightseeing/history trip” was also to Xi’an (Aug 2000). Then we moved to Xi’an in 2002, where I taught at Northwestern Polytechnical University until 2005.

I’ll start with a few photos from our quick 2016 visit, but then add “historical” photos from previous visits.

In the center of Xi’an, you’ll find the ancient drum and bell towers. Behind them is a historic district popular with tourists, so we wandered there for a few hours, buying Christmas gifts and reliving memories of our pleasant years in the city.

We stayed with friends, and from their balcony you can see the “air” that so damaged our health years ago. People say the air is “much better” than it was a dozen years ago, but I was told that it is still rare to see “clear” days like the one on the left.

Monday was a “day off,” so Vivian and I went to see some of the local sights. We were enamored with this Chinese “lion” and the Tang-dynasty style hotel behind it. The pictures turned out pretty well, though you can see that the air isn’t as clear as it was when I visited the “new campus”.

Our first stop this trip was to visit the “new campus” of NPU (it was under construction when I worked there). We really enjoyed seeing the beautiful fall leaves (which we don’t have in Hong Kong). The campus is at the edge of the city near the beautiful mountains, which unfortunately give the pollution no route of escape! But for our first two days, the air was clear and the sky was blue.

To the outside world, Xi’an is most famous for the nearby Terra-cotta army of China’s “first emperor,” Qin Shi-huang. He was certainly one of history’s most ambitious leaders, for he is credited with unifying various warring kingdoms, constructing the Great Wall, building the largest palace in the ancient world, and creating this tomb containing thousands of life-size soldiers to guard him in “the next life.” The exquisite clay army lay silent in their underground formation from 200 BC until 1974 when several farmers discovered them by accident. In addition to the clay soldiers and horses, two bronze chariots were also buried (see below). This is a UNESCO world-heritage site, and Chinese officials are to be commended for their work in patiently unearthing and reconstructing the figures, and carefully protecting one of the most important archeological discoveries of all time. I’m also glad that the ban on taking photos had been lifted before our 2005 visit!

The following photos were mostly taken from my old website (http://www.krigline.com/xian.htm).

The terra-cotta soldiers are one of the wonders of the ancient world.

Bronze chariots and horses were also discovered in the tomb. This shows how the Emperor traveled with his army.

Another marvel is the complete Ming Dynasty (AD 1400s) wall that still stands.

The Drum Tower in 2005. A park has been built between the Bell and Drum towers, with an upscale shopping mall underneath it!

An ancient dance sees new life at Huaqing Palace, one of several important historical sites not far from the Terra-cotta army.

Each life-sized clay figure is distinct; some believe they were modeled after individuals in Emperor Qin’s army.

In Sept 2003, we ventured to the countryside, where farmers still work to keep Xi’an’s population fed.

Here’s how one of my NPU students described Xi’an:
I love Xi’an, my hometown, because of its history, food and people. Xi’an’s most remarkable feature is that many ancient ruins still exist. The emperors of eleven dynasties in ancient China set their capitals in Xi’an. Secondly, there are various delicious snacks here (especially on Snack Street), and Xi’an gathers flavors from all over the country. Last but not least, people in Xi’an are very friendly, warm-hearted, diligent and brave. However, Xi’an isn’t perfect. The biggest problem is pollution, and sometimes you see sandstorms in spring or fall. Nonetheless, I believe Xi’an has a bright future; people here are trying their best to improve the environment. I love my hometown, and I welcome you to come meet the wonderful people, taste the great food, and learn about Xi’an’s rich history. — A Description of Xi’an (Amy, Junior 2002-03) 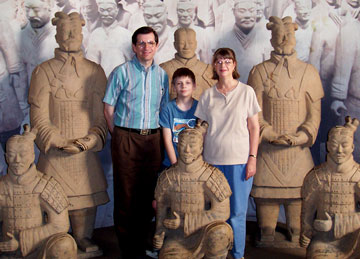 We gathered with the terra-cotta soldiers again in 2005, just before moving to Kunming. 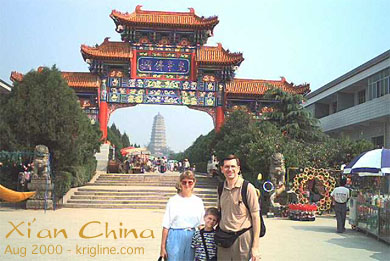 Memorable photo from our first visit to Xi’an, in 2000.

In the early 2000s, before students started watching films on their “smart phones,” we could draw large crowds to watch and discuss favorite films. Here, about 250 join us on campus! 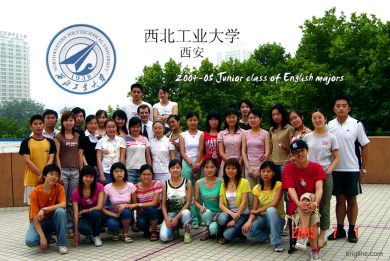 Just before we left NPU, I finally bought a “good” digital camera. This was one of my last class photos at NPU. (click it for a bigger image) 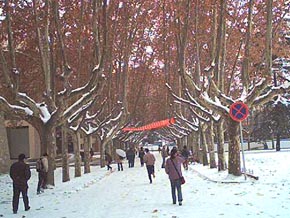 The only city we’ve lived in that snows heavily is Xi’an. Andrew enjoyed playing in the snow, and we all loved how the snow cleared the air!

WordPress doesn’t always put photos where I want them, but for most people, the photo on the left shows NPU’s beautiful tree-lined street with a snowy frock.

This was the largest class I ever taught in Xi’an (actually, Vivian and I co-taught it). We used films to help these PhD students improve their English.

Though we moved to Xi’an in Aug 2002, the first time we ever saw the mountains was November 2002! We saw this amazing sight about six times per year (usually after a heavy rain or snowfall), looking south from our apartment roof.

On the left, this was the way the neighborhood usually looked in 2002; imagine our surprise to find mountains one morning (right)!

The pollution took it’s toll. I cracked a rib coughing all winter, and ended up in the hospital (pneumonia) for two weeks.

Although Vivian was also pretty sick (cough/cold), she and friends still brought food and took care of me.

Another treasure that was buried under Xi’an’s dirt for a millennium is the Nestorian Tablet, now protected in Xi’an’s Forest of Steles Museum. The tablet was commissioned in the 700s (AD), for the opening of a Christian monastery and pagoda. The tower still exists (a UNESCO world heritage site). You can read more about this on my DaQin page.

In addition to its famous terra-cotta army, Xi’an also has many other ancient tombs, palaces and temples. It has one of the best history museums in China, a wonderful bird park, and beautiful natural areas in the nearby mountains. It’s really a great place to visit! 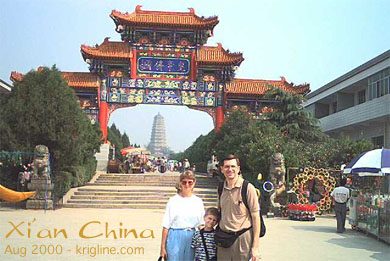