Our 2008 visit to the Great Wall, packed with Olympic crowds in August.

Michael has loved history-rich Beijing ever since his first visit in 1985 (while studying in Xiamen 1985-86). He also taught here in 1987, at which time he lived in the Long Tan Hotel (shown below–though it has changed a lot since then!). Michael returned to China in 1999 to teach in Tianjin for the summer, accompanied by six-year-old Andrew. Because an old friend lived in nearby Beijing, the duo visited twice, and then introduced Vivian to the city before returning to the US for a year. We all moved to Shanghai in 2000, lived in Xi’an from 2002 to 2005, then in Kunming until 2010, followed by 2011-15 in Xiamen, before moving to Hong Kong in 2015.

Beijing’s Long Tan Park, as seen from Michael’s hotel/apartment in 1987. Just looking at this old photo reminds me of how cold it was!

I taught English at the China Social University in 1987. Schools like this were popular with people in their mid-20s, many of whom had been denied a complete education during the Cultural Revolution.

In the summer, Beijing is quite hot, so I was always happy to find an ice block being used by a street vendor to chill a local soda.

As winter started to retreat, I remember seeing this vegetable piled on the sidewalks by the truckload. For a while, it was the only veggie available, so we were thankful.

In 1988, after I returned to grad school, my father was invited to attend this conference in the famous Great Hall of the People–a place I’ve never been allowed to enter!

That’s 6-year-old Andrew with my old friend Jimmy, walking on the Great Wall in the summer of 1999.

Vivian also visited the Great Wall with us in 1999. The inset photo is from a visit to Long Tan Park in 2003 (that’s me and Andrew).

The following photos date back to our short 2003 visit to Beijing. Unfortunately, it rained the morning we went sight-seeing and digital photography was in its infancy (older slides that were scanned look better). Nonetheless, I’ll post these little photos for old-times’ sake.

Michael’s 1987 home is the red hotel in the background. This 2003 photo looks back from the lake. An amusement park is behind us (that’s where Andrew and Michael rode the little cars in 2003).

In spite of the rain, it was nice to see familiar places like the Forbidden City (also called the Imperial Palace or Gu-gong).

Tian-an-men Square runs between Mao’s mausoleum (on the left), past the memorial to the People’s heroes, to the Forbidden City. The National Museum is behind us, and the Great Hall of the People (i.e., congress) is on the right of this photo.

Here’s Andrew with the main entrance to the Forbidden City behind him.

The main reason for our 2003 visit was to see two of Michael’s long-time friends. Jimmy was his best friend at Xiamen University (1985), and the pair traveled together to such exciting places as Huang Shan (Yellow Mountain) and China’s biggest waterfall in Guizhou.

The other friend is Holly, who was the tour guide for Michael’s first trip to Beijing (along with his parents in 1985). She also helped him find his Beijing teaching position in 1987, and her family was Michael’s second home during that semester. In 2003, Holly and her husband Gary were living in San Francisco, but we arranged for our paths to cross while she was visiting her family. We’ve seen Jimmy several times since 2003, including 2010 (though not shown here); the main reason for the 2010 trip was to participate in the wedding of Helen Yang, Michael’s former NPU student!

In 2010, Michael’s former student invited us to participate in their wedding!

Jesuits helped build the Ancient Beijing Observatory in A.D. 1442. Many of the astronomical instruments on top (you get a glimpse in the 2003 inset) date back to the 1600’s.

Vivian, in 2010, between “The Egg” and the back of the Great Hall of the People.

The main gate from Tian-an-men square into the Forbidden City.

In 2008, we got to experience the Olympics first hand. Note the Olympic Flame above the “Bird’s Nest” stadium.

We took many more photos of Beijing and the Olympics, so this is just a “little taste” of a great place to live or visit. 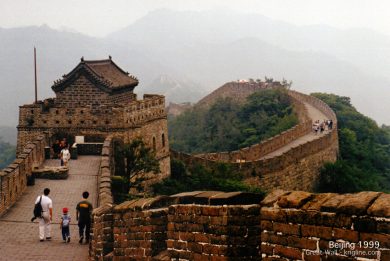