Xi’an is known for its long history as one of China’s ancient capitals. We had the privilege of living here from 2002-2005, and loved being surrounded by its history. The most famous thing discovered underground nearby is the Terra Cotta soldiers. Another treasure that was buried under Xi’an’s dirt for a millennium is the Nestorian Tablet, and above ground you can still visit the DaQin Tower where the Tablet was buried.

The Tang Dynasty was one of the most prosperous and open-minded periods in China’s history. Xi’an was the end of the Silk Road, which carried goods (e.g., silk, tea, porcelain) to and from the rest of the world. With the traders also came ideas, including religious ideas. The Nestorian Tablet is the oldest known Christian document in China, dating back to around AD 700, at which time it graced the landscape near a Christian monastery and school – namely the Da Qin monastery and tower. That tower still stands (protected as a UNESCO world heritage site), and we felt it was worth the trip out to see it. When political winds shifted near the end of the Tang Dynasty, the Nestorian Tablet was buried, not to see daylight again until AD 1623, when it was discovered and placed in Xi’an’s famous and unique Stele museum (shown below). The “Forest of Steles Museum” is said to be the oldest still-operating museum in China. Our historical curiosity about these things was aroused by a 2004 visit to the Stele museum, and we ventured out to see the tower in 2005. I’ve made the following images pretty large, but if you want larger versions, just write to me and ask.

In 2005, Vivian and our colleague Josh walk toward the tower, past a man with a rather rough job description!

What a beautiful country scene, of recently harvested wheat, ready to be threshed!

Here’s a beautiful shot of the tower, nestled between mountain and field, on the outskirts of Xi’an.

The Nestorian Stele was inscribed in AD 781 at the orders of the Emperor Dezong. It commemorated the opening of a Christian seminary and the pagoda you see here. The Stele also highlights the good relationship these early Believers had with China’s leadership. China’s modern government has restored this landmark in recognition of its important international historical significance.

The painting shown below was created by a good friend, Mr. Niu Guang Xian. I honestly can’t remember how we met, but I enjoyed listening to stories of his remarkable life. After retiring as an educator, he learned how to paint, and I remember seeing his work in a booklet showing works by elderly Chinese artists, on display somewhere in Europe. I loved his painting of the DaQin tower, and (at the age of 84) he painted a copy for me in 2005. He also gave me permission to post the following photo, which he took in 1997 when he was acting as translator for an important delegation of Chinese and “Nestorian” (also called “The Church of the East”) brethren. You can see that the tower had not yet been restored at that time.

After I saw this painting in an art-show magazine, the Chinese artist was kind enough to create a copy for me. If you click to see the full-size image, you should be able to read his translated calligraphy.

Mr Niu took this photo in 1997, when he was acting as translator for this important delegation of Chinese and Nestorian brethren. 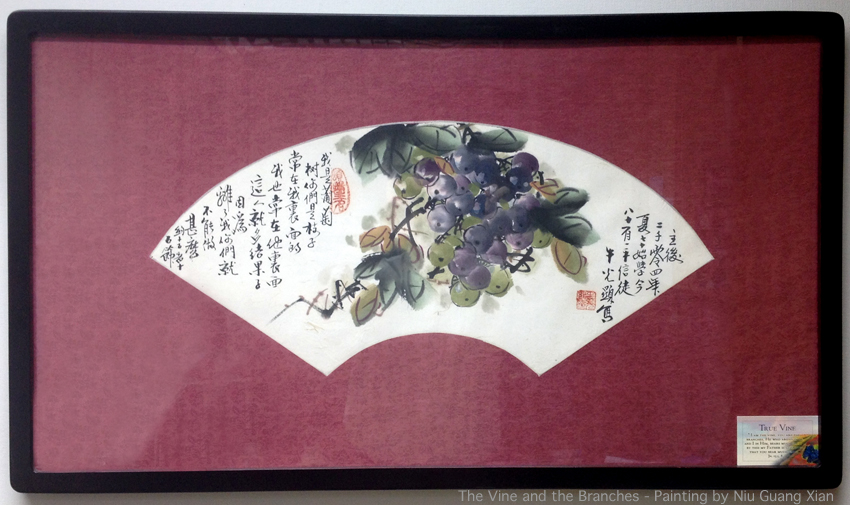 Another beautiful painting by Mr. Niu – now on display in my office in Hong Kong. It’s subject is “the vine and the branches” (John 15:5)

The DaQin pagoda is China’s oldest-known Christian structure. The other buildings in this ancient compound were destroyed during the Cultural Revolution, but this leaning tower remains as a tribute to the cooperation between Chinese leaders and Christians from the west around 1300 years ago. Both Nestorian Christianity and Buddhism flourished until around the end of the Tang Dynasty (circa 845), when China’s rulers turned against both “foreign religions,” destroying thousands of monasteries, temples and churches, and executing any who refused to turn from their faith. The tower was apparently too difficult to destroy so it became a Daoist shrine; it is still used by Daoists today. Its history was “rediscovered” in the late 20th century by researchers who bravely crawled up into the leaning building and found, among other things, damaged ancient statues of the Virgin Mary and Child Jesus, and Jonah in Nineveh (a Jewish prophet described in the Bible’s Old Testament).

You can find out a lot more by searching the web (e.g., look for “Da Qin” and “Nestorian” and you’ll find lots of cool info!).