Click here to see the article these photos go with, including a 2018 update (article by Gabe Orea, October 2014). ⇔

Why this special page?

Cancer is not pretty. The pain is real, the treatments are harsh, and the human body suffers from many terrible side effects. Gabe’s testimony highlights the “positive side effects” but he doesn’t want to hide the hideous side. Nonetheless, the following photos and captions are “too much” for some people, especially those suffering in the early stages of cancer, and thus I’ve moved them to this special page. –Michael Krigline

“In faithfulness You have afflicted me.” 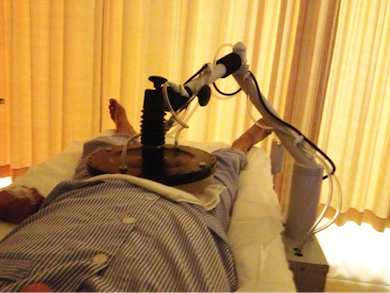 Thermotherapy burned my skin in big areas; it was so painful I actually cried every time I received this treatment. When your friend asks for prayer for harsh medical treatments, remember this.

Apologies for the graphic photos coming up, but cancer is not pretty. One of the most hideous side effects was a terrible infection on my arm and chest because chemo treatment left my immune system very weak. It not only looked awful, but it really hurt because the infection was deep in the nerves. You only see the surface, but I felt it much deeper. My poor family had to look at this for several weeks, because it was often too painful to wear a shirt. 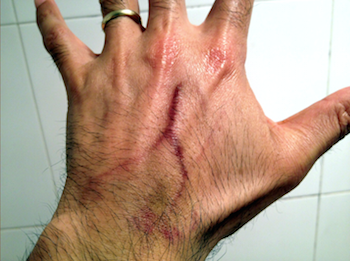 Also because of the toxicity of chemo, some of my veins burned from the inside out. That was very painful, too.

Click here to return to the article these photos go with (by Gabe Orea, October 2014).

Suffering is an ancient problem…

Job chapter 2:3-10 (probably the oldest book in the Bible)

3 And the Lord said to Satan, “Have you considered my servant Job, that there is none like him on the earth, a blameless and upright man, who fears God and turns away from evil? He still holds fast his integrity, although you incited me against him to destroy him without reason.” 4 Then Satan answered the Lord and said, “Skin for skin! All that a man has he will give for his life. 5 But stretch out your hand and touch his bone and his flesh, and he will curse you to your face.” 6 And the Lord said to Satan, “Behold, he is in your hand; only spare his life.”

7 So Satan went out from the presence of the Lord and struck Job with loathsome sores from the sole of his foot to the crown of his head. 8 And he took a piece of broken pottery with which to scrape himself while he sat in the ashes.

9 Then his wife said to him, “Do you still hold fast your integrity? Curse God and die.” 10 But he said to her, “You speak as one of the foolish women would speak.Shall we receive good from God, and shall we not receive evil?” In all this Job did not sin with his lips.

11 Now when Job’s three friends heard of all this evil that had come upon him, they came each from his own place, Eliphaz the Temanite, Bildad the Shuhite, and Zophar the Naamathite. They made an appointment together to come to show him sympathy and comfort him. 12 And when they saw him from a distance, they did not recognize him. And they raised their voices and wept, and they tore their robes and sprinkled dust on their heads toward heaven. 13 And they sat with him on the ground seven days and seven nights, and no one spoke a word to him, for they saw that his suffering was very great.

“We need to find God and He cannot be found in noise and restlessness. God is the friend of silence…. We need silence to be able to touch souls.” –Mother Teresa

• Photos are from Gabe

©2015 Gabe Orea. Posted at Krigline.com with permission. For contact and other info, visit About Us or see our Website Standards and Use Policy page (under “About Us”).